My own imagination is the main reason I put off starting an illustration. I dream up some idea, and in my mind it stays amorphous–not fully formed or solid, yet perfect. Therefore, any pencil stroke that begins the actual illustration looks horribly inferior to the idea in my head.

And as much as I grumble about doing my daily drawing practice, my grouchiest, briefest efforts keep resulting in the best images. I think it’s because I’ve dropped my standards as low as they’ll go: just put the pencil on the paper for a few seconds and call it “done.” There are no expectations, and therefore, it’s hard to feel disappointed. I’m just glad I can claim that I did my daily practice.

However, I observed a way to side-step this perfectionism or whatever you call this fear that keeps us from starting a project because in making it, we might muck it up. I’ll call it: “look away and draw.”

I got the idea from my 2.5-year-old friend, Dot. She and I were drawing one day, and I noticed that she’d choose a pen color, set the pen down on her blank paper, and then look away behind her at the closet.

I thought she was getting distracted, and I was about to re-focus her on her drawing when she spun her head around, looked at her paper, and squealed because what had been a blank, white page, now had vibrant swirls of color on it. I hadn’t noticed that she’d been moving the pen while she looked away at the closet. She thoughtfully chose a second color, set the pen down, looked away, drew, and looked back with delight and satisfaction.

I don’t know if I’m telling you to do your creative work blindfolded–but I have known writers who turn their computer screens to dark and then start typing without being able to read as they go. What struck me about Dot’s process is her zealous curiosity and thrilled satisfaction.

Rather than fretting about how the project won’t hold up to the ideal in our minds, we could be curious about how it will turn out, curious about what other paths it will take as it comes together, excited to see how it takes shape rather than focused on the finished image matching the ethereal idea in our minds. We could feel satisfied that we’re working on something, however it’s turning out.

The whole creative process might be more satisfying this way, but the hardest part for me, the getting-started-part, would be less painful, and I’d be less likely to put off getting started if I could think, “Hm, I’m curious to see how this will look…”

I heard a story on public radio about a study that showed that people who faced nerve-racking things to do (like a job interview) felt less stress and had lower blood pressure when they said to themselves, “I’m excited!” rather than “This is so freaking terrifying.” Well, I’m embarrassed to admit it, but I’ve done it. I was so anxious about some things that I made myself say, “I’m excited!” out loud. I felt like an idiot for a quarter of a second and then: it worked! I felt capable and fine, not freaked out.

So–put on your Mister Rogers sweater of optimism, cultivate curiosity about how your project will unfold, stand in your power pose and say, “I’m excited!”

We can feel ridiculous together while getting a bunch of creative work done and out into a world that needs it. 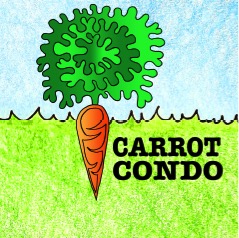 Ugh. Frustrating work today. Time, finally, to carve some block prints, and it’s one failure after another. Still, I’m staying with it. After tearing up some material in frustration (sad but true), I angrily scribbled on the torn pieces and carved sloppily, thinking I’d just keep practicing. But, well, the print turned out okay. Not quite how I’d wanted it. But maybe better for the ink colors and fabric I have in mind? Maybe these failures are telling me there’s a better idea out there if I just let go of my expectations a little. Or a lot. Okay. Letting go.